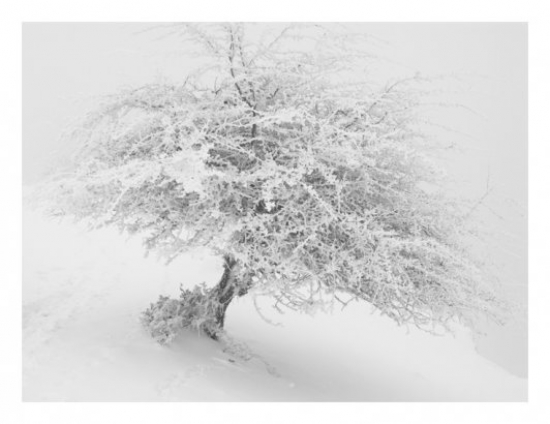 In Frozen Trees, Imanol Marrodán bases his work on the premise that trees are extraordinary beings. He attempts to demonstrate their value and importance by offering the chance, through their geographical situation in the landscape, to visit them and contemplate their process of growth and slow transformation. In this way, in the form of a map, he has depicted the place and environment where they live, through their geographical coordinates, also converted into QR codes for viewing on a cell phone.[Text from photoespana]

Their discrete and silent presence can hardly be noticed, perhaps because of their apparent immobility. Silent, confident, so strong and defiant but vulnerable and defenceless at the same time and yet we depend so much on them. There is great dignity to behold in their existence.

They are living beings which will never move from the place which, by chance, they were born and from which they will witness a multitude of changes taking place around them. Their branches extend patiently producing the oxygen which is vital for existence.

Indifferent protagonists, silent through the passage of time, trees are a metaphor which   cause us to reflect upon the slow rhythm at which nature is rigorously and constantly changing, compared to the frenetic rhythm of an artificial system created by man which impedes us from reflecting upon the essence and the importance of the values and identities which are lost in time which passes so fast it can barely be felt.  A slow and gradual rhythm enabling us to stop and think and learn to feel. That is what the trees appear to be telling us with their apparent and discrete immobility.

The trees, the snow, the ice and the fog form a timeless atmosphere, static and contemplative, like suspended time which contrasts with the trees themselves, living beings which depend upon the change of seasons which form the cycle of life in their lives. Their hibernation in such extreme conditions highlights even more the passage of time, slow and inexorable, close to the non-dimensional. They will still be here when we are gone and they will become part of the very soil from which they grew.

The project aims to show the value and the importance of these beings enabling us to monitor them thanks to the geographic coordinates, to visit them and contemplate their growth and slow change within their natural habitat.

You can discover where each tree is located on the map using the corresponding reference points.

This project, still being developed, is made up of photographs dating from 2003 until the present day. This group of photographs were taken in the Urkiola National Park around Anboto Mountain.”