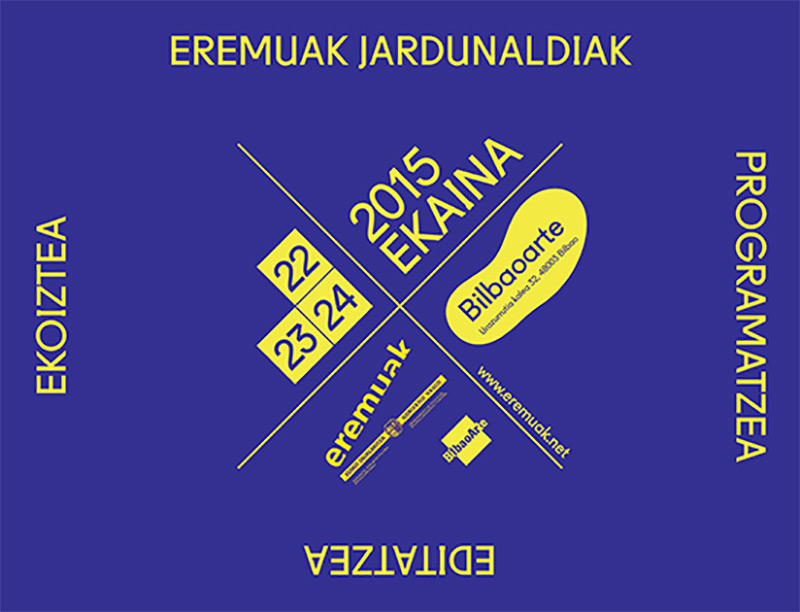 ⇒ Stories that provide documentary evidence, with Adriana Laespada [basque / spanish] and Oier Iruretagoiena [basque / spanish], everything that occurred during the sessions “programme, edit, produce” which took place at Bilbaoarte on 22, 23, and 24 June, 2015.

Participating in the sessions:

These seminars are established as a space for reflection on important questions associated with artistic practice such as “publish”, “produce” and “programme”. In turn, the seminars will set out to draw attention to a number of projects and initiatives that have been put forward in the last two eremuak programmes. These artistic initiatives and proposals have emerged within a programme that attempts to establish bridges and networks between different producers within the Basque artistic environment. The seminars to be held in Bilbaoarte establish nodes of reflection in the three theme areas to be discussed:

Over recent years and simultaneous with the successive institutional models that have appeared one after the other in the Basque art scene, a number of different projects have been generated, promoted by artists, and stable programmes have been developed in the context, as spaces for meeting and exchange. These programmes contribute to depicting scenarios that are, on occasions, linked to institutions, and on others, are “hosted” discontinuously in different spaces or even located on “private” sites. This section seeks to tackle the possibilities of a parallel or non-institutional programme through a number of examples managed by artists and located in a number of different cities, Barcelona, Bilbao and Porto.

One of the lines of action of eremuak has been to encourage a range of different publications such as books of artists, compilations of writings, the minutes of seminars, or specific publishing projects relating to the criticism and theory of art. The publication of art books and especially self-publication has secured an extraordinary presence in the publishing context and also in contemporary art. Book fairs such as Arts Libris in Barcelona, Libros Mutantes in Madrid and exhibitions such as “Auto-edit. New forms and models in self publishing and independent publication” at the Huarte Art Centre and an infinite number of small publishing initiatives are eloquent proof of this. Within this framework, the aim is to make this situation known to the public and bring about a debate on the different formats of production and distribution of printed or online material.

In the realm of art, the simple mention of the concept of “production” is a motive for a range of different interpretations and views. Artists, museums and institutions, biennials and galleries “produce” art. On the other hand, this “product” needs to be shown and brought face-to-face to the public in order to comply with the commitment required in the production process. We might ask ourselves who produces and what is produced. In this section, the consequences for artistic practices of the redefinition of the concept of “production” suffered both by institutions and artistic agents will be discussed.