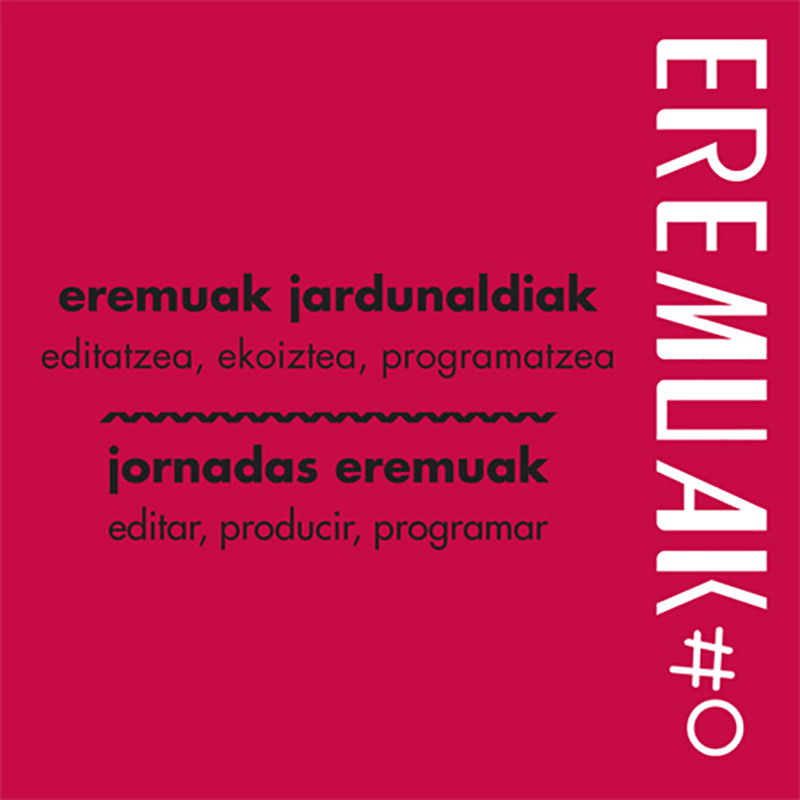 The roundtables were chaired by the member of the eremuak committee: Peio Aguirre, Nuria Enguita Mayo, Beatriz Herráez, Fernando Illana.

In addition to the roundtables, the following people took part in this seminar to deal with specific subjects:  Antonio Collados, Jon Mikel Euba, Ana Pahissa, and Aimar Arriola in conversation with Jeleton.

This seminar has been conceived as a showcase for projects and initiatives created since the eremuak programme was first announced in December 2010. Artists, groups, a range of different projects, publishing houses as well as other hybrid modes of action have been provided with support in a programme created with the aim of establishing connections and networks among different producers in the Basque art scene. These seminars, to be held at Arteleku, seek to tackle some of the questions raised in the proposals set out in the programme through the presentation of three roundtables for discussion and exchange.

One of the main lines of action of eremuak has been to promote a range of different publications such as books of artists, compilations of writings, the minutes of seminars, or specific publishing projects relating to the criticism and theory of art. This Roundtable brings together a number of different players – artists, writers, publishers – who work on publishing projects of different kinds, in order to establish a dialogue concerning the production conditions or distribution and exchange networks required for the development of their proposals.

Production, system of subsidies, fees, training and professionalisation are terms associated time and time again with art production. Against the background of the current crisis, in which the public model of support and promotion of contemporary art is under scrutiny, this roundtable poses questions such as: What are the direct consequences on artistic practices of the redefinition to which art production and exhibition institutions have been subjected? Or, in what way does its coexistence with the growing importance acquired by cultural industries affect the specificity of the language of contemporary arts?

Over recent years and simultaneous with the successive institutional models that have appeared one after the other on the Basque art scene, a number of different programmes have been created, promoted by platforms, groups or individuals who have developed stable programmes in the context, operating like meeting points for exchanges between professionals. These programmes contribute to depicting scenarios that are, on occasions, linked to institutions, and on others, are “hosted” discontinuously in different spaces or even located on “private” sites. This roundtable asks about the ways these proposals are organised and operated, their objectives or possible developments in the new scenario.

A display area will show off materials generated during the programme, editions and publications as well as audiovisual materials. Likewise, the seminar will be used to launch issue no. 0 of the eremuak newspaper.